With a sleek profile, clean lines and new paint job applied in 2016 at Pinmar, TRIPLE SEVEN is a real head-turner with well thought-out deck spaces and convertible cabins.

Built in 2006 and refitted in 2014, TRIPLE SEVEN has an exquisite, minimalistic contemporary interior by Newcruise Design, which incorporates tall windows that allows masses of natural light to pour in and flows seamlessly into the outdoor areas.

TRIPLE SEVEN can accommodate up to 10 guests across five comfortable and stylish cabins, with the option to convert the separate office/library in the gorgeous full-beam Owner’s suite into an extra cabin for two more guests.

The Owner’s suite also has a hidden security closet, plus his and hers dressing areas that are connected by an immense bath carved from Portuguese marble.

Further luxurious touches include a state-of-the-art cinema in the sky lounge, while out on deck there is plenty of space for socialising.

There is a large Jacuzzi surrounded by more sunpads aft, while the teak-laid beach club with lounge area, steam room and bar, is the place to chill out in before sampling some of TRIPLE SEVEN’s extensive water toys, including a giant inflatable slide, climbing wall and toddler pool.

Other standout features include both a karaoke and a full night-club set-up, with lighting, lasers, smoke machine and DJ decks – perfect for hosting your own exclusive party. 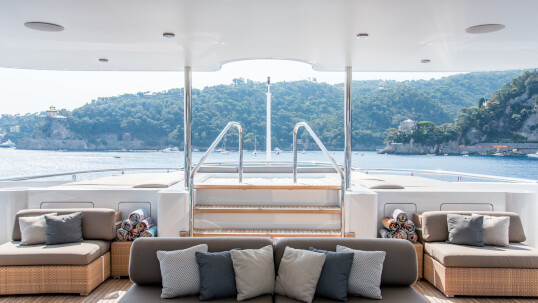