The 42.60-metre 2003 Feadship full displacement motor yacht FULL MOON is offered for sale and is a bona fide ice-strengthened explorer yacht ready to take you wherever you want to go in the world. Not only that, but she is the only Feadship to be built as a waist deck explorer vessel, making it easy to launch and recover her tender without disturbing guests.

FULL MOON’s naval architecture is by De Voogt Naval Architects, based on a concept by Doug Sharp Design, while her luxurious interiors are by Glade Johnson.

Though the style is timeless, with cream and tan sofas, lots of dark wood and gleaming chrome, there are also contemporary flourishes such as a LiteTouch system throughout.

FULL MOON had new generators fitted in 2017 and completed her 15-year Lloyds class survey in 2018. As part of her 2020 refit, the generators were serviced and she had a comprehensive repaint, including hull, superstructure and bottom.

FULL MOON can accommodate 11 guests across four cabins, including a full-beam Owner’s cabin with a king-sized bed and a study, two doubles and a twin with an additional Pullman berth. There’s also the option for a convertible fifth cabin in the sky lounge and there is room for eight crew on board.

The sun deck is the obvious hub of outdoor socialising on FULL MOON, with a large Jacuzzi with sunpads, dining for 12 and a bar.

There is also alfresco dining and a bar on the aft deck, plus access to the swim platform, for making the most of the garage toys.

Powered by Twin Caterpillar 3412s, FULL MOON cruises at 13 knots and her 4,700 range makes her a ‘go-anywhere’ yacht. She also has Naiad Datum zero speed stabilisation.

FULL MOON yacht is built to Lloyd’s 100 A1 Classification and can easily be brought into MCA class.

Don’t miss this chance to buy an immaculate turnkey yacht, which is offered to the market for a limited time while her two-boat Owner considers his cruising plans for the coming season. 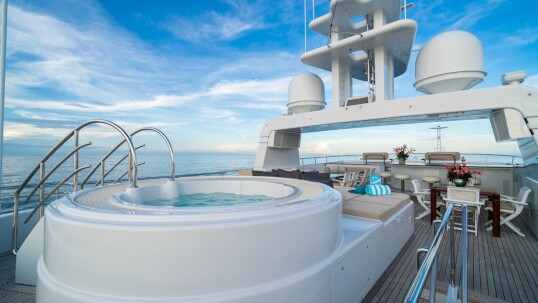