The 46.80m yacht AUDACE is offered for sale and is the first fully custom project from the Ancona-based yard Cantiere delle Marche.

In 2020 to 2021, the commissioning and current Owners decided to press on with improvements they had identified during their first season onboard and the Lusben team was commissioned to carry out the works; these included extension of the stern and bow, rebuild of the owner’s deck and installation of a service and an owner’s private elevators.

The outdoor areas were of the utmost importance to the initial build project, and these have changed relatively little. On the main deck, there’s a huge aft terrace that includes a bar, two dining tables that can seat large parties, a very generous lounge area, plus plenty of sunpads.

On the lower deck aft, there is an unconventionally large beach club half enclosed, half open. The enclosed beach club can convert to a disco, gym or cinema room.

AUDACE yacht can accommodate 10 + 2 guests across five cabins. There are two double cabins on the main deck with opening doors to the deck. The lower deck comprises a double cabin and a convertible twin cabin with fold-down balconies. Above the bridge deck is the Owner’s deck, which comes with his ‘n’ her bathrooms, a large lounge which can be converted to an extra double bed, plus access to an open aft deck with its own Jacuzzi and walkaround decks.

With a range of 4,700 nautical miles, AUDACE is a stunning explorer yacht, as capable of hosting big events as she is cruising the world’s seas. 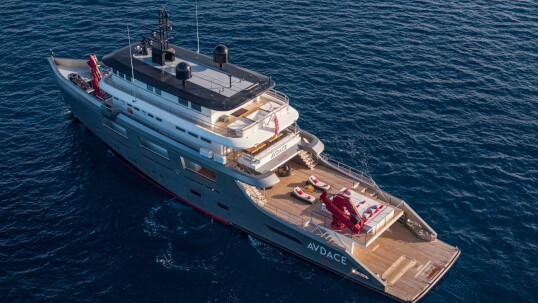