The fourth, final and largest Moonbeam, was designed and built by William Fife Junior for Charles Plumptre Johnson, the son of the physician to Queen Victoria, a keen racing sailor. She is the only Moonbeam Gaff Cutter design of the 20th Century and the Winner of the Kings’ Cup in 1920 and 1923.

First launched in 1914 and commissioned after the Great War, in 1920, she is perhaps best described by Uffa Fox:

“No matter whether she is under way or at anchor, Moonbeam IV yacht is beautiful to look upon, and combining the speed of a racer with the comfort of a cruiser, is a vessel any seaman would be proud to own.”
The famous French sailor, Eric Tabarly, also wrote a letter to the owners, describing her as “the most beautiful yacht ever built”.

Owned for many years by Prince Rainier of Monaco, she was a familiar site all around the Mediterranean, playing host to many famous names. Following this era as a Bermudian Ketch, she suffered a period of neglect until rescued by her then owners in Greece, and later taken to Asia to be given a new lease of life. Thus in 2000 began a new period in this famous yacht’s history.

All the woodwork above and below decks is handcrafted to an exceptional standard by skilled craftsmen, using the finest woods. It was decided to return her to her 1927 rig, the towering “Marconi” Gaff Rig. All deck furniture is as original, and the interior layout is very similar to the original Fife design, with a few concessions to modern comforts. Everything from the exotic hardwood interior to the tip of the towering spruce mast was handpicked for beauty, authenticity and functionality. The bronze and other fittings are faithful copies of the original Fife designs. A full photographic history of the refit is available to interested parties showing the removal of the superb teak planking, the renewal of the steel frames as necessary, and the replacing of the original teak duly treated and using new bronze bolts. The 2001 restoration was too complete to be detailed here, but let us say that the original superb Fife hull has been saved in its entirety, but most of the vessel dates from that period, with improvements and modifications since.

Moonbeam IV yacht has enjoyed a successful 2016 racing season with seven first places, including the Voiles de Saint Tropez and d'Antibes, the Régates Royales in Cannes and the Panerai Classic Yacht Challenge. 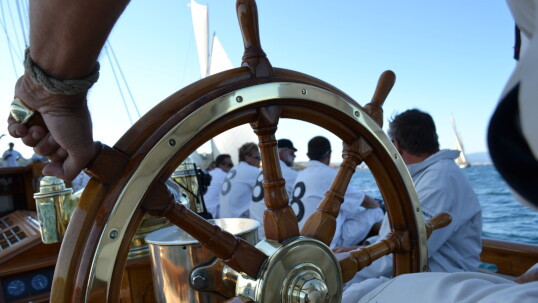