The sailing yacht Imagine is an elegant blue water cruiser, which has circumnavigated the globe four times

The 44.18m 2010 Alloy Yachts sailing yacht IMAGINE is now offered for sale and is a robust yet sophisticated displacement sloop, kitted out with the latest technologies.

With an exterior design by Dubois Naval Architects and interiors designed by Maria Luisa Poggi, this yacht is the successor to the much earlier (1993) yacht IMAGINE, built for the same Owner by the New Zealand yard.

It’s a case of imitation as a form of flattery, as the classic lines and low profile of the first yacht were kept, though an extra 11 metres were added as well as several design developments, such as a composite sliding keel and a Southern Spars rig with carbon-fibre mast and boom. The results were staggering, IMAGINE yacht took the ‘Best Sailing Yacht (30m-44.99m)’ award at the following year’s World Superyacht Awards and she has since gone on to complete four circumnavigations.

While IMAGINE is clearly an extremely capable yacht, inside she is also very comfortable, with a fresh, clean palette of whites and creams against light oak and a real sense of space in the salon, thanks to the large windows, which provide masses of natural light.

IMAGINE yacht can accommodate eight guests across four cabins, including a full-beam Owner’s cabin, a VIP, a twin cabin with a Pullman berth and a fourth cabin with a French side bed and second Pullman berth. There is also space for up to six crew.

There is lots of space out on deck too – guests can dine alfresco in the huge cockpit, or lounge in the sun further aft. There’s even space for a pool on the foredeck.

IMAGINE had a refit in 2020 which included the rebuild of her main engine and generators, and a gearbox inspection. Her teak was re-caulked and her running rigging was checked and polished. Additionally, her blade, staysail sheets and runner tails were replaced and her mast, mast hydraulics, cranes, electrics, Reckman and rams were serviced. IMAGINE also had her 10-year Lloyds survey renewed in 2020.

Powered by a single Caterpillar C18 Diesel engine, IMAGINE yacht has a motoring cruising speed of 10 knots and a maximum speed of 14 knots.

Currently based in Monaco, IMAGINE is a practical and unpretentious go-anywhere yacht, designed for real adventure sailing: a true sailor’s yacht. 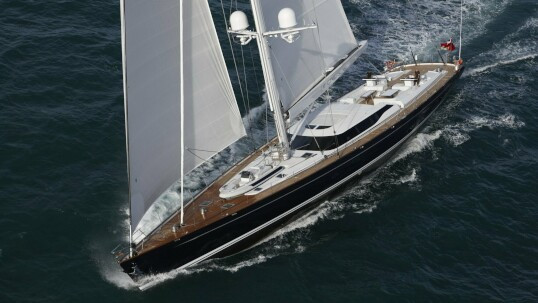