BUCKPASSER yacht’s naval architecture and exterior design is by Jack Hargrave, while her interiors were fully refurbished in 2017 by Dana Yacht Décor. She is a rare find by today’s standards – beautiful, functional and economical.

Hargrave custom built BUCKPASSER for a Florida-based family who wanted a yacht that could act as the mothership for their fishing and hunting exhibitions for weeks at a time. BUCKPASSER’s second owner used her as a more traditional motor yacht, acting as a luxury base for kayaking, diving, kiteboarding, surfing and sailing excursions.

From the moment you enter the enclosed aft deck salon, which has been renewed with full bar, cocktail table, teak decks and L-shaped sofa, it’s clear BUCKPASSER is a classic yacht that has been maintained to the highest of standards.

Doors here lead into the main salon with its large windows either side, shelves of books, built-in teak cabinetry, slightly separate card room and a formal dining table for eight forward.

BUCKPASSER yacht can accommodate eight guests across four cabins, including two king-size doubles and two convertible twins, all en suite. There is also space for eight crew on board to help facilitate adventure and sports cruising of a high level.

BUCKPASSER has a large swim platform and there is also space to land a helicopter. Behind the bridge is an outdoor sit-up bar with 270°views and a large deck space when the tenders are launched.

Powered by detuned 565hp Caterpillar 3508 engines – considered some of the most robust marine diesel engines ever built – BUCKPASSER yacht has a top speed of 12 knots and cruises at 10 knots, providing an effortless 4000+ miles of range. 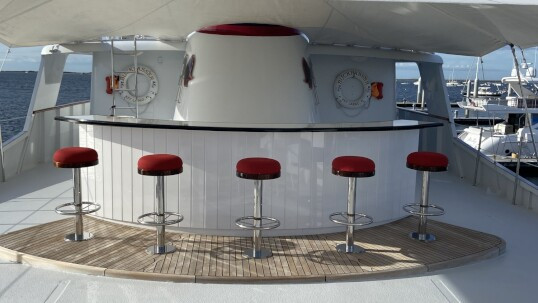